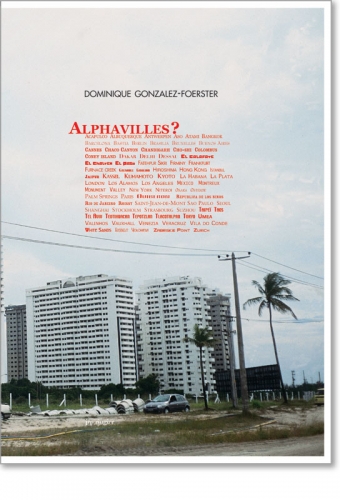 An artist's book in the guise of a poetic travel guide

The book is a collection of images of cities and architecture gathered by the artist from all over the world and ordered alphabetically. It starts with Acapulco-Agra-Albuquerque …

"In Brazil, a developer named Albuquerque has been building 'Alphavilles' since 1974: overprotected 'model' urban enclaves, on the outskirts of big cities. A name directly inspired by Jean-Luc Godard’s film Alphaville (1965), which shows a city controlled by an anxiety-inducing and absurd computer … How does the Alphaville of São Paulo resemble that of Godard? Is the planet being progressively covered with Alphavilles? Climate, urbanization, modernization, regionalism, and tourism are spatial cocktail ingredients, sometimes boring, sometimes very surprising. Where are the differences, where are the repetitions?" (Dominique Gonzalez-Foerster)

The book is published on the occasion of two exhibitions that took place in 2004, at de Singel in Antwerp and at the Kunsthalle Zürich, in collaboration with the two institutions and Les presses du réel, Dijon.