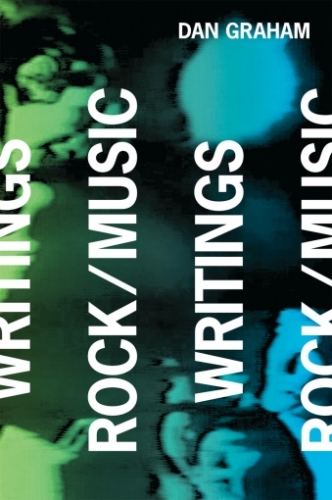 As admired for his writing as for his work in art, photography and architecture, Dan Graham was one of the first contemporary artists to embrace Punk, Postpunk and No Wave, becoming a figurehead for those movements, and an early supporter of (and friend to) Glenn Branca and Sonic Youth among many others. Rock/Music Writings collects 13 of Graham's most influential writings, on bands ranging from The Kinks to Bow Wow Wow, first published in art journals such as Real Life, Open Letter and ZG between 1968 and 1988, and in the now rare volume Rock My Religion. It includes such landmark essays as “Punk as Propaganda,” which explicates the self-packaging and media critique of The Ramones, Devo, the Sex Pistols, the Desperate Bicycles and others; “Rock My Religion,” in which Graham traces themes of ecstatic reverie in rock performance (with a focus on Patti Smith), through a beautiful composite of quotation, commentary and photography; and “New Wave Rock and the Feminine,” which discusses the onstage personae of Lydia Lunch, Debbie Harry and Siouxsie Sioux, and the gender politics of all-female groups such as The Slits, The Raincoats, Bush Tetras and others. Throughout Rock/Music Writings, Graham's appraisals are clear-eyed, sophisticated and poetically constructed, a genre of their own within artists' writings.